In 1993 Erica Thomas Howe came to the US from Australia for a judging assignment. We met her at the Mission Trail Poodle Club Puppy Match and our friendship developed into a family like relationship with Erica visiting us on a regular bases. After visiting Erica in Australia we returned to the US with an 11 week old puppy that we named Rikki. Her registered name was Ch. Marechal Comin to America. Our handlers at that time, Dennis McCoy and Randy Garren, did a beautiful job of showing her. We were thrilled when she returned home a champion.

It is with great sadness that we said good bye to Erica, July of 2008. She passed away from cancer at the young age of 53, leaving the dog world with one less knowledgeable dog person who contributed in a positive way.

Our next import also came from Erica but the plan right from the beginning was that McCoy would not stay in America as Rikki had. McCoy was to come to obtain his American championship and we would collect semen for storage from him and then ship him back. While Erica and I made plans for McCoy’s visit, I told Erica to just bring him when the Nationals would be going on and she could show him there. We had no idea he would go WD and BOW that day. McCoy was later sponsored by Toni and Martin Sosnoff of Atalanta Kennels while being specialed. Two years later, they returned him to his home country as a multiple Best In Show dog. 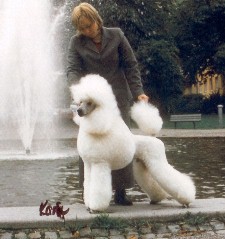 It was Erica Thomas-Howe, who told us about Tango. She had met him when viewing a litter in Sweden that he had sired. She said, “Mary, you’ll love this dog. He’s like your Sport in temperament and brains. Would you like me to ask Christina (Tango’s owner at the time) if he would be available to the US?” Trusting Erica’s opinion of what was a quality dog, I told her to proceed.

Christina of Sandust Poodles, not only agreed to share him with us but she also agreed to grow a show coat on him because we wanted to add an American championship title to his Scandinavian titles. A year later Tango was sent to us in a beautifully conditioned show coat. He arrived only understanding Swedish but was quick to learn English.

Tango has contributed positively to not only American pedigrees but Australian, South African, and Finnish pedigrees. Beyond that, he’s a cherished member of our family.

See Tango’s page for the rest of his story. 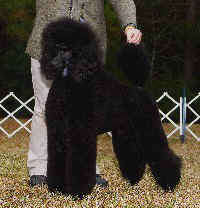 Michael Gadsby of Afterglow United Kingdom, emailed us about a black puppy boy he bred and felt was a potential show prospect. Scott flew to the UK to see the puppy firsthand. He loved his temperament, structure, and coat texture so arrangements were made for the newly named Gadsby to come to us.

He finished his championship at just over one year of year. Gadsby now lives happily with Lane, Jerry, two cats, and a pharaoh hound.