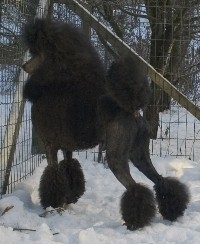 It is through the dogs that Scott and I have made many, many friends throughout, not only the USA, but the world. We feel so fortunate for this because we would never have had the opportunity to meet these wonderful people. Poodles throughout the world are of a similar type, so it is not unusual for breeders in all three varieties to import and export. 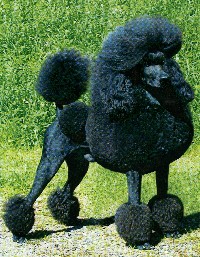 Pirkko Ranta-aho in Finland waited patiently until we had just the right dog to send her. We chose Jaxon as the dog that would be hers. Little did we know that he would do so well. In Finland the blacks and whites compete together separated from the other colors. In 2001-2002 Jaxon was the #1 Black Standard Poodle.

As of October 2002 Finland would not allow any docked dogs to be imported into the country. Jaxon was sent to Finland before 2002 so he was able to be imported and shown. Jaxon was listed in the Scandinavian Poodle Magazine, as one of the 12 standards who are “Influential imported docked stud dogs.”

Jaxon easily picked up the necessary CC’s to achieve his Finnish Championship after two years of age. Then Pirkko thought it would be fun to put the necessary other champion titles on him to make him an International champion. Off Jaxon went to Sweden, Estonia, and Latvia where he had many group placements.

He did well for Pirkko’s selective breeding choices for him. He has sired a Best In Specialty winning daughter in Sweden who is a Nordic champion. He has a son in Norway who was the #1 standard in 2007 along with many other children who are champions.

When I visited Finland in 2006, Jaxon remembered me the minute he heard my voice. It was definitely a case of “the tail wagging the dog,” because he couldn’t stop his body from swinging back and forth in excitement.

In 2009 Pirkko gifted Jaxon’s frozen semen to Scott and me. It is being stored in southern California and we look forward to using it with just the right girl. 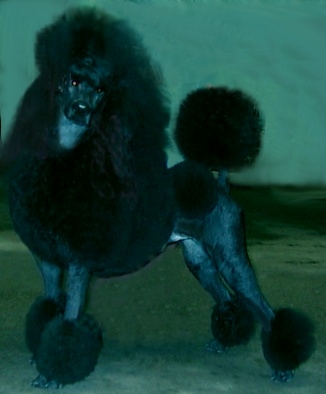 American and Finnish Ch. Cabernet’s As You Like It Sir Ascot

In 2002, Pirkko once again approached us for another dog. She wanted a bitch but because of Finnish Kennel Club rules, it could not be docked nor have the dew claws removed. It was five years before we had a litter with enough girls. where Scott and I felt comfortable picking one at two days of age that would NOT be docked. Moira was that puppy.

Pirkko decided that she wanted Moira to get her American championship. We all knew that it would be a challenge because she would be walking into the ring with a “natural tail,” which isn’t the norm in America. I showed Moira as a puppy and each time I was asked by the judge, “What’s with the tail?” and I would always say, “She’s an export.” I did manage to put some singles on her before she went to Chris and Rachel. The judge who awarded her the championship point said, “I hate the tail but couldn’t deny her quality.” So, at 13 months old Moira was an American champion and her trip to Finland was planned.

She and I flew to Finland and 42 hours after arriving we were off to an all breed show with Moira entered. Showing her was a fun experience for me in spite of the unfamiliar ring procedure. She placed 2nd in the group, received two CC’s then went on to earn her necessary third one after two years of age.

Pirkko and I had fun planning Moira’s first breeding because of the different available pedigrees in Scandinavia. In early 2009 she had her first litter sired by “Ossi” ( Finnish Ch. Sir Ascot’s Stunning Onyx. )

We are so fortunate to have a friend like Pirkko.