Ch. Cabernet’s Caught In The Act 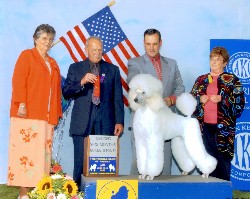 Nora, our Tango-Bunni daughter, was to us, an outstanding puppy from the very beginning and she caught Scott’s eye from all the puppies in her litter. I started showing Nora as a puppy in the Bred By Exhibitor class and at 8 months of age she was awarded a 3 pt major at a show. A short time later she was sent to our handlers in NC. While being shown by Chris and Rachel, Nora was awarded Best of Variety at a Poodle Specialty, second in a competitive 9-12 class at our PCA Nationals and multiple group placements.

While being shown by our handlers she would sit on her grooming table at shows and tap people on the shoulder with her paws. Nora has that special unexplainable magic that causes everyone to pull her into their hearts and she has passed this onto her puppies. 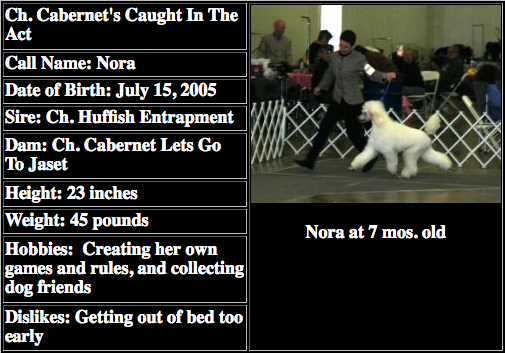