Christian at 7 months of age was Winner’s Dog at the Washington Poodle Specialty in Maryland for a 4 pt major. What a fabulous win! He then went reserve the second day under renown poodle breeder, Luis Aizcorbe. We were very complimented. 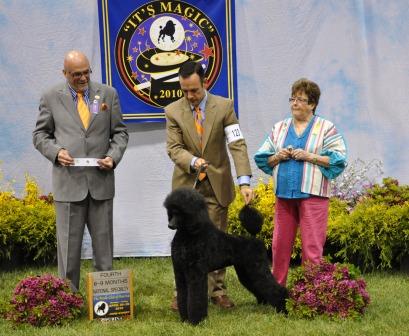 More recently at our Poodle Club of American National Specialty, April 28, 2010, Christian won fourth place in a large, very competitive 9-12 month puppy class. We were delighted with how well he showed and appreciated all the nice comments we got from other breeders about him. 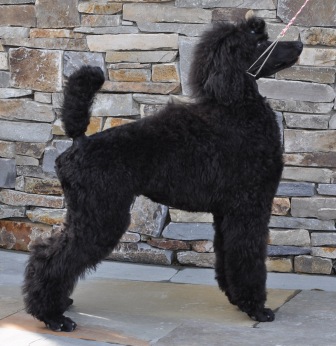 Christian made himself known starting at five weeks of age. He has a natural air of ease in his movement combined with confidence and correct structure. He has been a fun puppy to live with because of his happy, outgoing but stable temperament.

Christian was entered in a match that was held in Dixon and put on by the Sacramento Dog Fanciers Kennel Club. It always draws many exhibitors who bring out their puppies and older dogs to practice being shown. Christian was awarded Group 1 in the Non-Sporting puppy group over 11 other puppies. When the judge handed me his big rosette he said, “He not only can move beautifully but he’s sooooo poodle-y.”

We then had to wait four hours to go back into the ring for Best In Match. Christian was being highly considered over a doxie puppy but as the judging wore, the temperature started dropping, and the wind kicked up Christian decided that the game was over for him. He started bucking and springing up in the air like a baby goat. The judge’s finger moved to the doxie puppy. Which by the way, was a very nice puppy.